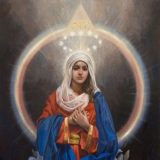 We gathered Easter Sunday for a teleconference call in celebration to lend our energies to imprint the Collective Consciousness of humanity with the element of Love and Christ Consciousness.

Yeshua presented some new information about our transformation and ascension process. Yeshua also imprinted us with these massive energies so we can integrate them into our bodies and serve all of humanity as we reflect them consistently through our energetic field.

If you missed this celebration and harvest of Light energies, below is a recording of the event.

Your light Reveals the Darkness